From the Azores of Portugal to the Pajaro Valley, Joseph Peixoto, a potato farmer from Faial, Portugal, moved his family to Watsonville, California in the early 1900s. He and his family became well known and respected in their community. He raised nine children in their family home on Beach Road.

Joseph’s son, Francis, became a skilled commercial fertilizer and chemical supplier for a majority of the farmers in the Pajaro Valley. Francis married a local girl named Sadie and together they raised seven children. One of their sons in particular took a special interest in farming and loved to ride with his dad from farm to farm to learn all he could about farming. He was very intuitive at a young age and by his teenage years, he was ready to venture into farming himself. While still in high school, he rented 40 acres in three different parcels in the Pajaro Valley.

Dick’s career began with conventional farming but he always had a natural passion for utilizing Mother Nature to assist him in the fields. He preserves the riches of the soil and you’ll often hear him say, “We farm the soil and the soil will grow the crops.” He slowly backed off from using the conventional chemicals he was used to and instead implemented more natural processes like amending the soil, introducing beneficial insects and beneficial habitats. He noticed the produce began to taste better and last longer, so he and his family decided to make the commitment to farm 100% organically.

After being told it couldn’t be done, Dick converted over 1,000 acres of farmland in Santa Cruz County to organic. Dick takes pride in his decision to commit to a total organic program. In 1996 the Peixoto family started Lakeside Organic Gardens which has become the largest family-owned and operated solely organic vegetable grower/shipper in California.  Producing over 45 commodities at any given time, they are 100% committed to organically grown 365 days/year.  They now farm on over 2,000 acres and 75% of the production is in the Pajaro Valley. The remaining 25% is grown in the Imperial Valley in order to keep a steady supply for our customers throughout the winter months.

Dick and his wife, Marisela, raised three children in the Pajaro Valley. Their son, Rickey, is a tractor operator for the family business. Their youngest daughter, Amanda, is married to a local organic farmer, Hugo Castro, and has a lovely baby girl, Melia Heirloom. Amanda is working in accounting for her family’s businesses. Ashley, the eldest daughter, started the California Grill with her father at the Freedom location and has gone on to pursue other business ventures. 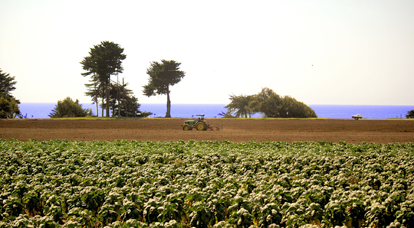 Joseph Peixoto, a potato farmer from Faial, Portugal, moved his family to Watsonville, California in the early 1900s

His grandson, Richard “Dick” Peixoto, the owner of California Grill, inherited his love for farming. Dick is an organic vegetable farmer and owns Lakeside Organic Gardens, the largest family-owned and operated solely organic vegetable grower/shipper in California. Producing over 45 commodities, they are 100% committed to being organically grown in the USA.